Repto is a fictional character in the Micronauts series. He is an evil alien flying reptile humanoid introduced in 1979.

Repto are evil winged reptiles in the Micronauts series. They usually appear to be green humanoid with long head and tail with red wings. Although Repto toys have been produced in other colors, they have only appeared in the original green/red colors in fiction. Reptos often use lasersaws, blasters or a mace as weapons, as well as having clawed hands.

In a Mego catalog a Repto can be seen in the chariot of Equestron.[1]

In the Mego 1980 Spring Toy Dealer Catalog a wingless Repto can be seen piloting Ampzilla.[2]

Repto was designed by California R&D for Mego. Concept art depicted him in green and did not include wings. Instead of a lasersaw he carried a shield. His head was to have a removable cover that revealed the brain.

The patent for Repto depicted him without wings and using a his blaster for his left hand, and a blue Giant Acroyear missile as his right hand.

Early prototype figures were produced both green and black variants. The green version had a blaster for one hand and a ring from the vehicle for President Acroyear with a missile from Acroyear II on the other.

Repto was released as part of the 4th wave of Mego Micronauts in 1979. Versions of this toy were also released by Gig and Lion Rock.

The hands for the Palisades release of Repto were designed by Dave Waugh.[3]

Repto was released by Palisades in 2003 for four color variants.

According to developer Bryan C. Wilkinson the translucent purple Palisades Repto was to have glow-in-the-dark yellow parts, but they ended up normal yellow plastic. There were two unproduced color variants intended to be exclusive. One was two shades of green, while the other was red with translucent green wings. [4]

In 2018 parts for Repto were released on Shapeways by Mathew Robert Ignash.

In January 2015 Machinema announced they had completed script writing for the Transformers: Combiner Wars series together with some behind-the-scenes photos, which showed several Palisades Reptro toys in their collection.[5]

Half Man Half Reptile From the Distant Planet of Sauria.

Repto was featured in the 2005 Micronauts Revolution DVD digital comic by Eagle One Media which was based on the first 5 issues of the Image Comics Micronauts comic series.

Reptos have been a stock villain in Micronauts comics fiction over the years.

In "Arena of Death" a Repto with a blaster and lasersaw was forced to battle as a gladiator by Baron Karza. It attacked Bug, who defeated it with his rocket lance.[6]

In "Rendezvous in Sub-Atomica!" Psycho-Man attacked Bug with his fear-inducing Control-Box while an "android" Repto was attacking him. [7]

In "...the Harder They Fall!" a Repto working for Psycho-Man killed Jasmine.[8]

In ""Assault on SHIELD" the Knights of Neep reported confronting Reptos. It is said Reptos have "bat-winged space ships".[9]

In "Last Stand in Fantasy-World!" Reptos participate in Baron Karza's fleet which attacks Homeworld. A Repto is seen defeated by prince Pharoid.[10]

In "This Battlefield Earth!" a Repto joins the Death Squad in attacking the Micronauts. He is defeated by Bug with his Rocket Lance.[11]

Antron and Repto of the Death Squad were seen in a flashback in issue 42.

When Marvel lost the license to Micronauts it included losing the rights to Repto, and they have not appeared again the Marvel Universe. 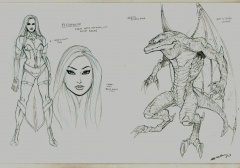 A group of bounty hunters including Antron, Centaurus, Kronos, Lobros, Membros and Repto briefly fought Micronauts when they arrived in Chicago during Baron Karza's invasion in Micronauts volume 1 number 8 by Image Comics.

Reptos were reoccuring alien monsters in the IDW Publishing Micronauts series from 2016.

Several Reptos are among the cast in the 2018 art series Micronauts Protectors of Inner Space by Brian Vox. A Repto appeared on the cover of issue 10 fighting Angel Commander and Galactic Defender.

A character named Repto-X appeared in issue 30. This Repto was based on the purple/yellow and clear/black Palisades Reptos with two Centaurus Laser Bow weapons.

Repto appeared in a 1979 toy commercial along with the other 5 Micronauts alien action figures. He was described as half reptile.[12]

There is a fan-made mesh and skin for Repto in the 2002 Freedom Force video game.[13]

A new mold by Mego. This 1:18 scale figure comes with two cuffs, removable glow-in-the-dark brain, lasersaw and blaster. Variants of the brain came in orange or grey color.
The head of Repto was remolded for Leborio.
The wings on Repto were recolored for Chromantron, Topen, Toriac and the Bat-Shuttle.
The lasersaw was seen on the prototype for Aloros.
The blaster and lasersaw were recolored black for Toriac.
The blaster of Repto was to be reused on the unreleased Palisades toy Anuboid and on Necros the Membros.

Sold in Italy by Gig, this toy was nearly identical to the Mego version.

This version of Repto came with his brain and a Time Traveler seat adapter peg that couldn't be used much because of his tail.
He did not come with cuffs, lasersaw, blaster or wings.

A release of the Mego toy in France by Pin Pin Toys.

A recolor of the Mego toy with an added pair of hands, a mace and a stand.
This toy came in several color variations: Green/red, light blue/dark blue, translucent purple/yellow and translucent/black. Each produced in equal numbers.