Solitaire is a fictional character in the Rock Lords series introduced in 1986. She is the queen of the Jewel Lords.

Solitaire is the heroic queen of the Jewel Lords. She rules the Jewel Lords from the Crystal Palace, a strong hold hidden in the Rock Glades of Quartex. She can reflect laser with her diamond body and has a dagger weapon. She collects jewels and tests them for unusual properties and sometimes pilots her own Rock Pot vehicle. 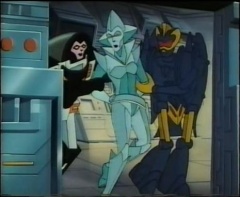 Crasher and Pincher take Soliaire in GoBots: Battle of the Rock Lords

Solitaire first appeared in the 1986 animated film GoBots: Battle of the Rock Lords. She teamed up with Nuggit to seek help from the Guardian GoBots.

Solitaire appeared in the 1986 Rock Lords Coloring Book by Golden, a division of Western Publishing. In the story "The Battle at Stonehead" she has Boulder collecting jewels for her from the dead city. She has a Rock Pot vehicle.[1] 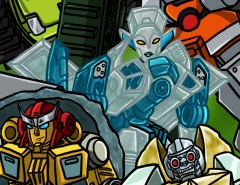 Solitaire was featured in the 2016 Ask Vector Prime story Echoes and Fragments, set during the events of The Transformers: The Movie. The manipulations of the evil Gong and Sideways resulted in various GoBots, Rock Lords and Starriors swapping places with characters during the events of that film. After Magmar's tribe allied itself with the Autobots and Guardians Solitaire pointed out the Quartex had vehicles capable of space travel.[2]

Solitaire appeared in Fun Publications Transformers: Renegade Rhetoric episode 11 "On the Rocks". She participated in a mission to GoBotron to sign a peace treaty with the Guardian GoBots. When jailed she converted to diamond form and deflected the energy beams on her cell.[3]

In episode 43, "Of Rocks and RoGuns Part 1", Scope stumbled upon the lost city of Clastixandria where discovered the comatose forms of the Jewel Lords, hooked into a pulsating crystal.[4]

Solitaire and the other Jewel Lords appeared in the episode 44 story "Of Rocks and RoGuns Part 2", where they were released from captivity.[5]

Solitaire appeared in the episode 64 story "Combiner Wars Part 1". She greeted General Newcastle when he arrived on Quartex.[6]

Solitaire appeared in the episode 65 story "Combiner Wars Part 2". She was part of a party that surrender to Cy-Kill and Magmar after Leader-1 and Boulder had been captured. Her prompting started the evil Rock Lords and Renegade GoBots into fighting over the control of Quartex.[7] 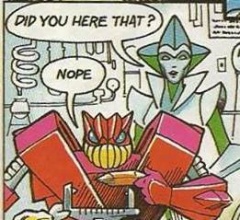 Solitaire and Flamestone in "There's Ssomething Flashing Over There Let's Go!"

Turns from diamond to Jewel Lord. Comes with a gold sword weapon.
This toy was released in different colors for Machine Robo: Revenge of Cronos as Diaman by Bandai.
This release has packaging that references the GoBots series and was packaged by Bandai.

The US and UK release of Solitaire by Tonka. The toy was identical to the Bandai Europe release.