R.A.T.S., an acronym for either Robot Anti-Terror Squad or Robot Anti Transformation Squad, was a short-lived robot and vehicle toy-line created by Tomy and released in Europe, Japan and the United States in 1985.

The toy line consisted primarily of recolored robots from Starriors, which was also created by Tomy. The primary gimmick of each toy was some example of wind-up automation, such as a rotating weapon or tool, or an electronic automation, such as firing discs or locomotion. The line was more numerous in Europe, where is was sold in several countires in multi-language packaging as the Robot Anti-Terror Squad. The only backstory for the toys was that which was provided on the packaging itself (in English, French and Italian):

From the depths of space came the enemy battle squadron...hostile hordes of alien robots. Earth was the prize they fought for and Earth was their battleground. But they were not prepared for Earth's last line of defense... An army created to crush and destroy any invader. They're the ultimate weapon — the last line of defense of Planet Earth. They're fierce. They're mean. They'll take on anybody ...anything! They're R.A.T.S.! The Robot Anti-Terror Squad.

In Japan and the US the acronym was changed to Robot Anti Transformation Squad. In the US the packaging added a call out to the toys being compatible with other toy lines.

They came... Strange new forces from outer space, robots capable of changing their appearance. Chaos reigned as they fought for the prize possession: Earth! But these robots were not prepared for the meanest and baddest of what man had to offer. R.A.T.S. The Robot Anti Transformation Squad!

Designed for play with most action figures including: Tribots, Masters of the Universe, The Transformers and GoBots. 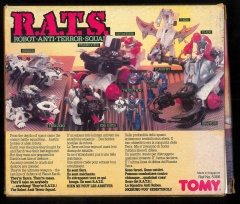 Fifteen European R.A.T.S. toys were manufactured primarily in Thailand and Singapore, though at least some were later produced in France. While only one wave of toys was publicized via the back of each toy's box or card, at least two releases exist that were not depicted in the initial wave, both of which were recolored Starriors toys. Due to the later manufacturer's reference numbers on their packaging, they may have been part of an unpublicized second (or supplementary) wave. 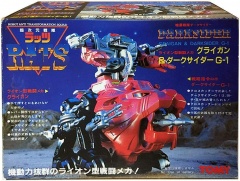 R.A.T.S. released a total of 7 toys in Japan split into two factions: the Darksiders and Delfighters (short for Dimensional Fighters). Six toys were vehicles with pilots and the last was a large humanoid robot named Mauses. 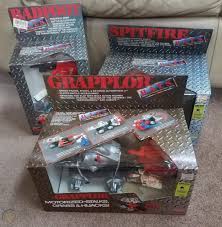 R.A.T.S. released a total of 3 toys in the United States with the Starriors line releasing many of the other molds in the US market. In the US they were branded as a line intended to play with other toy popular lines.