FansProject is a toy company created in 2008 that specializes in third-party Transformer toys and accessories.

FansProject started out in 2007 as TFLab. Their first mass produced kit was the Classic Cliff Conversion Kit which was made in resin and produced in only small quantities. Its purpose was to upgrade the 2006 Classic Cliffjumper. This limited run kit sold out quickly and obtained high prices on the aftermarket.

As FansProject 2008 their real debut was with their City Commander which was used as an upgrade to the 2006 Target exclusive Ultra Magnus. The "City Commander" set out to allow the toy to be more like the Ultra Magnus of Generation 1.

They also produced the ABT OP Upgrade Set for Alternators Optimus Prime/Binaltech Convoy, consisting of a transforming gas can that became a gun reminiscent of Generation 1 Prime's gun, as well as a Matrix add on.

City Commander's claim to fame allowed FansProject to become a household name for Transformers fans, and paved the way for many other third-party companies to follow. This was only supplemented by the release of their G3 Trailer, notable for the ability to tow the Commander-series trailers around.

Their next few projects of the TFX Crossfires line were made by a smaller branch in their company, and were made to compliment the Transformers: Energon combiners. The first example of this was the Aerial Team Appendage Add-On Kit for Energon Superion Maximus, granting it higher pose ability and better proportions. This set came in grey and white versions. 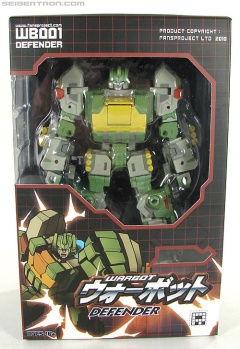 In 2010 came the first full figure from FansProject, Defender, designed as an homage to Generation 1 Springer, including the ability to turn from a robot to a truck or to a helicopter. This figure was well designed and had die cast placed at strategic points to not knock against any other point. This toy is notable for having enough pose ability and strategically placed holsters to allow it to take its gun from its holster and aim it, without the need of the collector to remove the weapon themselves.

The next point in the TFX Crossfires line granted us with Explorer an axe wielding sociopathic scientist, and Munitioner a weapon obsessed gun wielding sociopath. These two were designed to go together, as well as completing the ROTF Bruticus set to create a Generation 1 Bruticus, called Colossus.

Their later endeavors include the Protector designed to emulate Rodimus Prime, and the Targetmaster Sidearm.

In 2011 FansProject released a series of toys homaging the original Insecticons called Backfiery, Stormbomb, and Thundershred. Explorer was remolded into a stand along homage to Micromaster Fireshot called Flameblast while Munitioner was remolded into an homage to Micromaster Growl named Warcry. Protector was recolored black and given a new weapon as Shadow Scythe. They also produced a limited run of recolors of the Sidearm toy as a fundraiser called Blesser.

In 2013 FansProject released Car Crash and T-Bone, Downforce and Last Chance, homages to the Generation 1 Stunticons. The released their Headmaster inspired Quadruple U, Virus and Smart Robin. They released a set of recolors of their Colossus combiner called Explorer/Munitioner and original Glacialord characters Fangro and Tailclub.

FansProject version of Apeface, Hardhead and Snapdragon were among the toys featured in the third-party panel at TFNation in August 2016.[1]

Ankylobot, Dinogo and Tyranobot were among the unreleased third-party Transformer toys on display at TFNation in August 2016.[2]